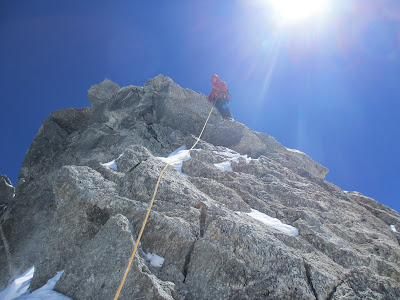 “Going to the right place at the right time with the right people is all that really matters . . . what one does is purely incidental.”

After a fantastic week in Chamonix, we found ourselves feeling both satisfied and tired. After a lot of contemplation, we decided that we were ready to go home! I suppose you would call it a “psychological burn out”. All the mountain days were starting to feel a bit samey; it seemed more valuable to save the adventures for building great memories in the future rather than this feeling of ‘getting them done’. As Suzana (our wonderful Chamonix hostess!) put it, “Mountains are not frogs. They do not hop away”. 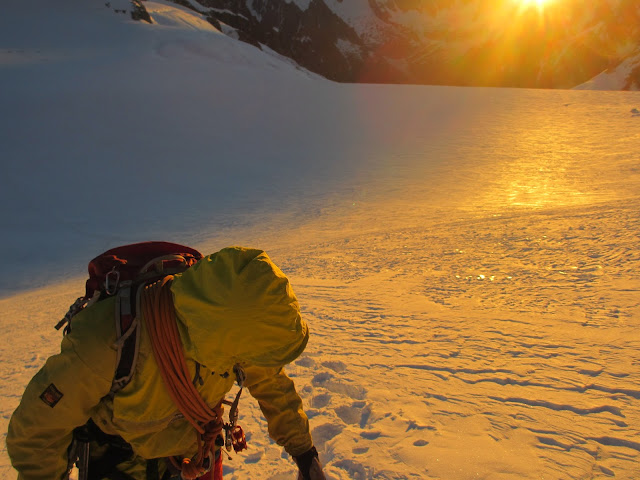 It was the first time either of us had been to Chamonix, and the vibe was very different to anywhere else we had been. For starters, there were a lot more English speaking people around (in Switzerland we hardly met any climbers from the UK), and the town had much more of a climbers feel to it, with an impressive collection of gear shops where you could spend hours wanting after things you didn’t need! After three very enjoyable rest days, we packed our bags and took an afternoon lift up to Aiguille de Midi. Suzana accompanied us, but unfortunately couldn’t join us due to a broken collar bone. Whilst she had only planned to see us off, on arrival at the top station was handed a token saying she was assigned to the 5.30pm lift down, giving her a two hour wait!
We had taken a tent with us, and were a little concerned by the “NO CAMPING” signs at all the lift stations. But as we descended to the Col du Midi we were very relieved to see several tents scattered around the glacier. Safety in numbers! There was a lot of fresh snow, perhaps as much as 30cm, but as there had been a day of good weather since the storm we were able to take advantage of fairly well established tracks. We chose a site for our tent, and since everyone else had dug out a hole we thought we should too. Our axes were rather ineffective at shifting snow and upon borrowing a shovel from our new neighbours we soon had our tent pitched with stunning views across the Mont Blanc Massif. 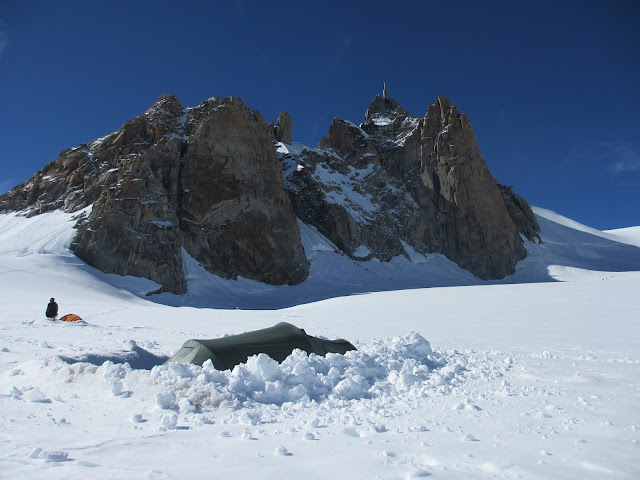 The following morning we made a fairly late start, setting off at about 6am just as the sun was rising. After a couple of hours of walking, there was a tricky section leading up to the Col du Mont Maudit, involving steep powder snow with an icy base underneath. Once over the col, it became incredibly windy! It was an icy, cutting wind and as we zig-zagged up towards the summit of Mont Blanc, it alternated between being a side-wind, and one that was full on in-your-face-take-your-breath-away! Eventually we reached the summit, and sought refuge from the wind by dropping over the far side of the ridge. Here it was still and peaceful, and as we caught back our breath we felt delighted to be on top of Europe’s highest peak. It also represented the completion of our “top ten highest” list, and this gave us a great deal of satisfaction. 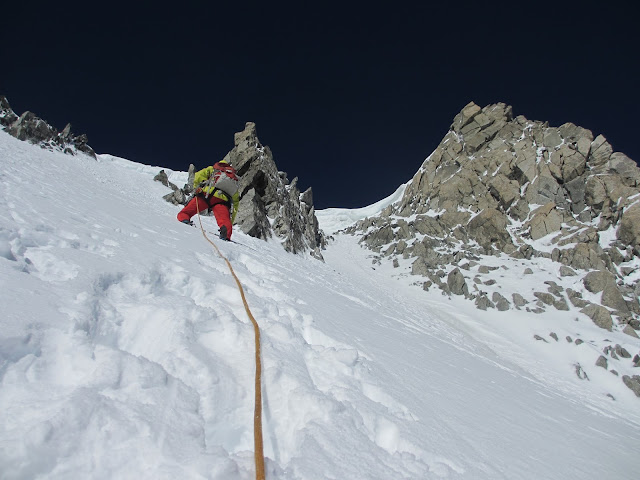 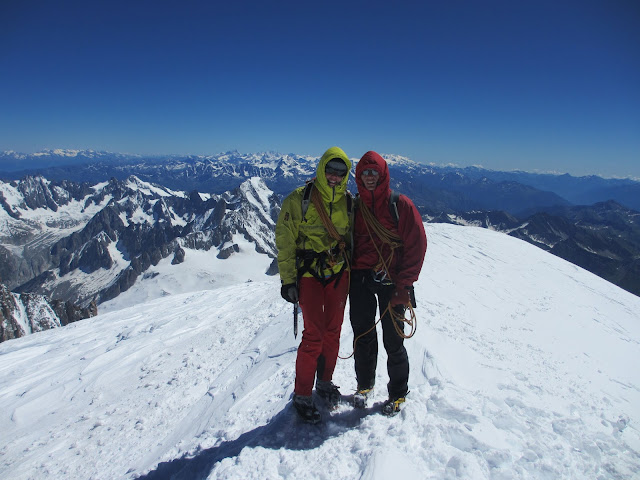 We walked over the far side to reach the subsidiary peak of “Mont Blanc de Courmayeur”, and then returned to the top of Mont Blanc, to meet a fresh set of people on the summit; one man asked us with admiration if we had just climbed up from the Italian side!
In descent, we retraced our steps until shortly before the summit of Mont Maudit. We climbed to the summit via an icy/snowy slope, and descended rocks on the far side to return to the col. I had been a bit worried about down-climbing this steep section, but it was actually not too bad now that more people had passed over it.
We finished the day with a final short detour to gain the summit of Mont Blanc du Tacul, which had a rather exciting icy section at the top, and involved a bit of axe swinging! From the summit, we got a fantastic view of all the tops we had climbed that day. 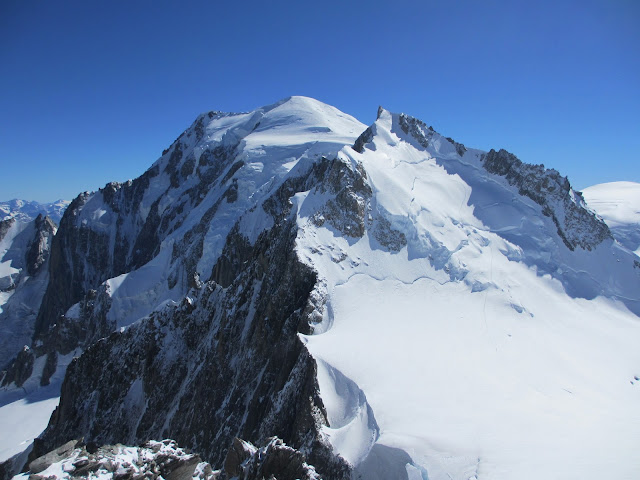 The following morning we took the first lift back down to Chamonix. Even though Mont Blanc presented no great technical difficulty, its status gives it an air of distinction and it was certainly a perfect finale to what has been an incredible trip. Having achieved our modified goal of climbing the ten highest peaks, and with a total of 38 summits we are proud of our efforts and fully inspired for many adventures to come! 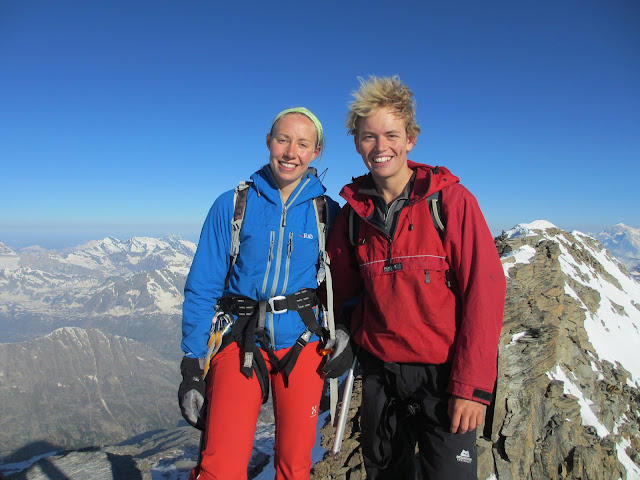